Robin Seidel, an architect working to save Boston from rising seawater, survived her first flood as a child. “I was nine years old when the police knocked on our door, telling us to evacuate because the Susquehanna River was breaching its banks,” she recalls. “I was scared. We had to quickly pack up and stay with my grandmother.”

"It engrained in me how weather impacts people. Now I'm motivated to design buildings that will stand the test of time."   — Robin Seidel, AIA, Climate resiliency architect at Kleinfelder

Seidel, 33, was unharmed when the levees flooded in Kingston, Pennsylvania, in 1996. But the emergency—caused by blizzards and extreme rain—motivated her to pursue a lifelong passion: resilient design. “My interest in resilience began in childhood,” says Seidel, a member of the American Institute of Architects (AIA) and climate resiliency architect at Kleinfelder, a multidisciplinary firm focused on fighting climate change. “It ingrained in me how weather impacts people. Now I’m motivated to design buildings that will stand the test of time.”

In her new hometown of Boston, Seidel has plenty to keep her busy. The city is situated along the Gulf of Maine, which is warming faster than 99 percent of the ocean due, in part, to changing sea patterns from melting ice in Greenland and the Arctic Ocean. Coupled with increased heat and precipitation, the rising sea level is threatening the low-lying city, much of which was built on landfill over the past 300 years along a 50-square-mile harbor. In 2012, Boston narrowly avoided Hurricane Sandy, which pummeled neighboring New York City, killing 44 residents there and causing $19 billion in damages and lost economic activity. Then, in 2018, two nor’easters hit Boston at high tide, causing record-breaking flooding. “It was a wake-up call,” says Nasser Brahim, a senior planner at Kleinfelder. “Fifty years from now, Boston is on track to have significant flooding events once a month, costing $1.4 billion annually. So, Sandy missed us, but we’ve been acting like it hit.” To save the 685,000-person city, the local government is calling on architects to help implement one of the most ambitious municipal resiliency plans in the United States: Climate Ready Boston. Launched in 2016 by Mayor Martin J. Walsh, Climate Ready Boston is an initiative to prepare the city for the long-term impacts of climate change. It aims to do so by implementing measures that include increasing access to the city’s 47-mile waterfront and simultaneously protecting it from major floods. First, officials commissioned local scientists to continuously research how climate change will impact the area in the next 50 years. Then they collaborated with architects, engineers, and landscape architects to design resilient solutions—ones that will withstand the natural elements—for the city’s five most at-risk coastal communities (Downtown and North End, East Boston, Charlestown, South Boston, and Dorchester). “Architects are at the forefront of climate adaptation,” says Chris Cook, the chief of environment, energy, and open space in Boston. “They’re designing public realms that not only protect communities but also give them great recreational benefit. Without their help, none of this stuff gets built.”

"It's not just about keeping out water. They also look at how to keep the city alive, addressing issues of equity by finding a range of solutions that everyone can afford to ensure that neighborhoods retain their vitality"   — Jay Wickersham, AIA, lawyer in Boston

The city’s first challenge is to preserve its existing neighborhoods and historic buildings. Founded in 1630, Boston has 58 national historic landmarks, more than any other city in the United States. To protect these buildings, architects are implementing immediate solutions like deployable flood barriers, which can include aluminum flood planks that are stacked in front of doors to keep out water. Architects are rewriting zoning laws so that residents can make adaptations like moving mechanical systems from basements to roofs. They’re also helping to identify strategic areas in neighborhoods that can be flood-proofed to keep entire blocks from going underwater: For example, parks can be altered to act as buffer zones, and new floodwalls can double as harbor walks and art installations. “Architects are great at making existing neighborhoods more resilient because they think holistically,” says Jay Wickersham, AIA, a lawyer in Boston. “It’s not just about keeping out water. They also look at how to keep the city alive, addressing issues of equity by finding a range of solutions that everyone can afford to ensure neighborhoods retain their vitality.” 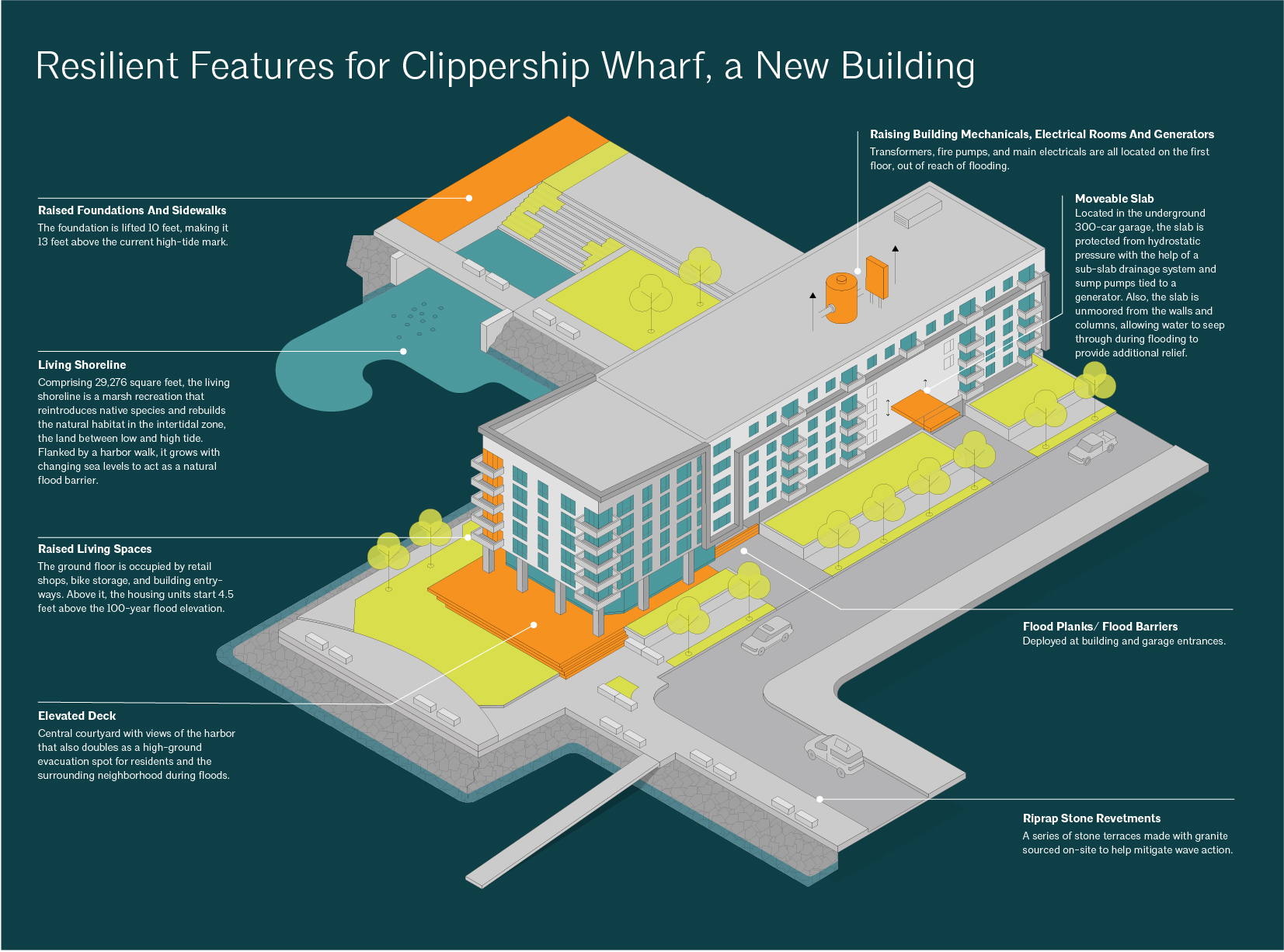 In East Boston, Clippership Wharf is a new mixed-use project on 12 waterfront acres that are vulnerable to flooding. To protect the site, architects raised the foundation 10 feet, making it 13 feet above the current high-tide mark. They installed a movable slab beneath the underground garage that can seep water and tied it to a drainage system, sump pumps, and an emergency generator. They also added an elevated deck that can be both a community spot and a safe haven during floods. “Resilient design is about inclusion,” says Andrew Stebbins, AIA, a senior project manager for the Architectural Team. “At Clippership, we created a high point for safety but also made it accessible for people from the neighborhood to enter and enjoy views of the water. It was a great opportunity to create a space that brings the community together.”

Throughout the city, architects are working with officials to combine all the individual projects along the harbor into a comprehensive whole—a patchwork barrier of resiliency known as the Resilient Boston Harbor Vision. Looking at a section of adjoining properties, architects may suggest adding a concrete reinforced wall on a building to keep out water, then link it with a neighboring park that acts as a natural barrier, and finally tie the park to a new construction with resilient features. Overall, the idea is to ensure that people are protected while bringing them closer to the city’s coastline on a daily basis. “Designing a resilient city means you’re also creating a better and more functional place for communities,” Seidel says. “I love living on the water. It’s what makes Boston great. So we’re working to bring people closer to the harbor while also making it safe—ensuring a brighter future for everyone.” 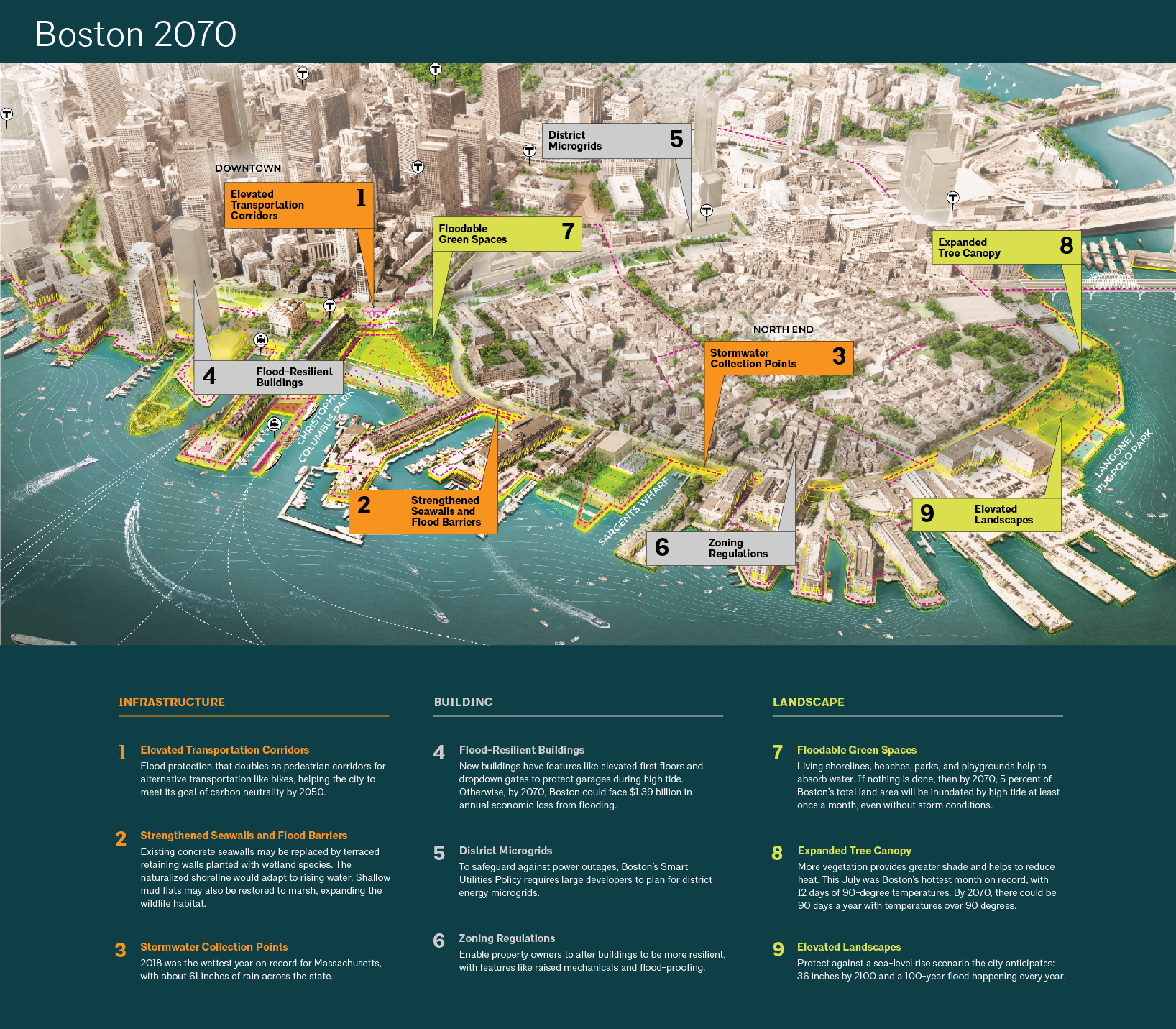 This story was produced by the WIRED Brand Lab for The American Institute of Architects.

The Future of Resilience & Sustainability

Content used with permission from WIRED Magazine. In 2012, as Hurricane Sandy battered the east coast, Diane Hellriegel made the most difficult decision of her life—to abandon her home in Breezy Point, New York. “My father built that house,” she says. “It was heartbreaking. I didn’t know what I was going to do.” In the… Read more »

Climate change affects us all, but doesn’t impact us all equally. This article is part of a new series, Building Equity, that explores how architects are working with communities and civic leaders to develop creative, innovative design solutions that fight climate change, systemic racism, and inequities in the built environment. It’s time to show the world… Read more »