In 2012, as Hurricane Sandy battered the east coast, Diane Hellriegel made the most difficult decision of her life—to abandon her home in Breezy Point, New York. “My father built that house,” she says. “It was heartbreaking. I didn’t know what I was going to do.”

In the aftermath of the storm, one that would devastate the northeast coast—causing $71 billion in damage in the U.S. according to the National Oceanic and Atmospheric Administration, and claiming 117 lives according to the American Red Cross—Hellriegel returned to find her home destroyed. Soon after, unsure of her future, she was chatting with a neighbor in Queens when she heard of an experimental plan from Illya Azaroff, FAIA, a Brooklyn architect who wanted to create a house with unrivaled resilience and sustainability. “I talked with Diane and she was excited to try this new type of home,” says Azaroff, founding principal of architecture firm +Lab. “So, I teamed up with the Federal Alliance for Safe Homes (FLASH) and brought together an amazing group of industry professionals. We gathered all the best practices and put them into this one house — the idea was to use science to find a better way to build.”

"We rebuilt Diane's house so she can move into the first home that combines elements of both resilience and sustainability in housing—it's a gamechanger."   — Illya Azaroff, AIA, Founding principal of architecture firm +Lab

In May, after three years of planning and construction, Hellriegel finally moved back into her home, now a groundbreaking structure that represents some of the most innovative practices in design—the Hurricane Strong Home. Designed and built by Azaroff and a team of national experts in everything from concrete to skylights, the 1,200-square-foot house embodies some of the most cutting-edge practices in both resilient and sustainable design. In architecture, resilience refers to a building’s ability to withstand the natural elements (hurricanes, tornados, fire), while sustainability refers to its ability to reside in harmony with its natural surroundings (passive heating, cooling, minimal footprint). Often thought of as separate practices, the two approaches were integrated like never before in the Hurricane Strong Home—a potential new direction for homeowners everywhere. “I’ve never seen a resilient home like this,” says Joel May, the resilient construction director for BASF who helped orchestrate the house’s construction. “Weaving everything together into one platform with so much documentation of the process is significant. It’s going to set the standard for resilient building practices.” Azaroff agrees. “We rebuilt Diane’s house so she can move into the first home that combines elements of both resilience and sustainability in housing,” he says. “It’s a gamechanger.” 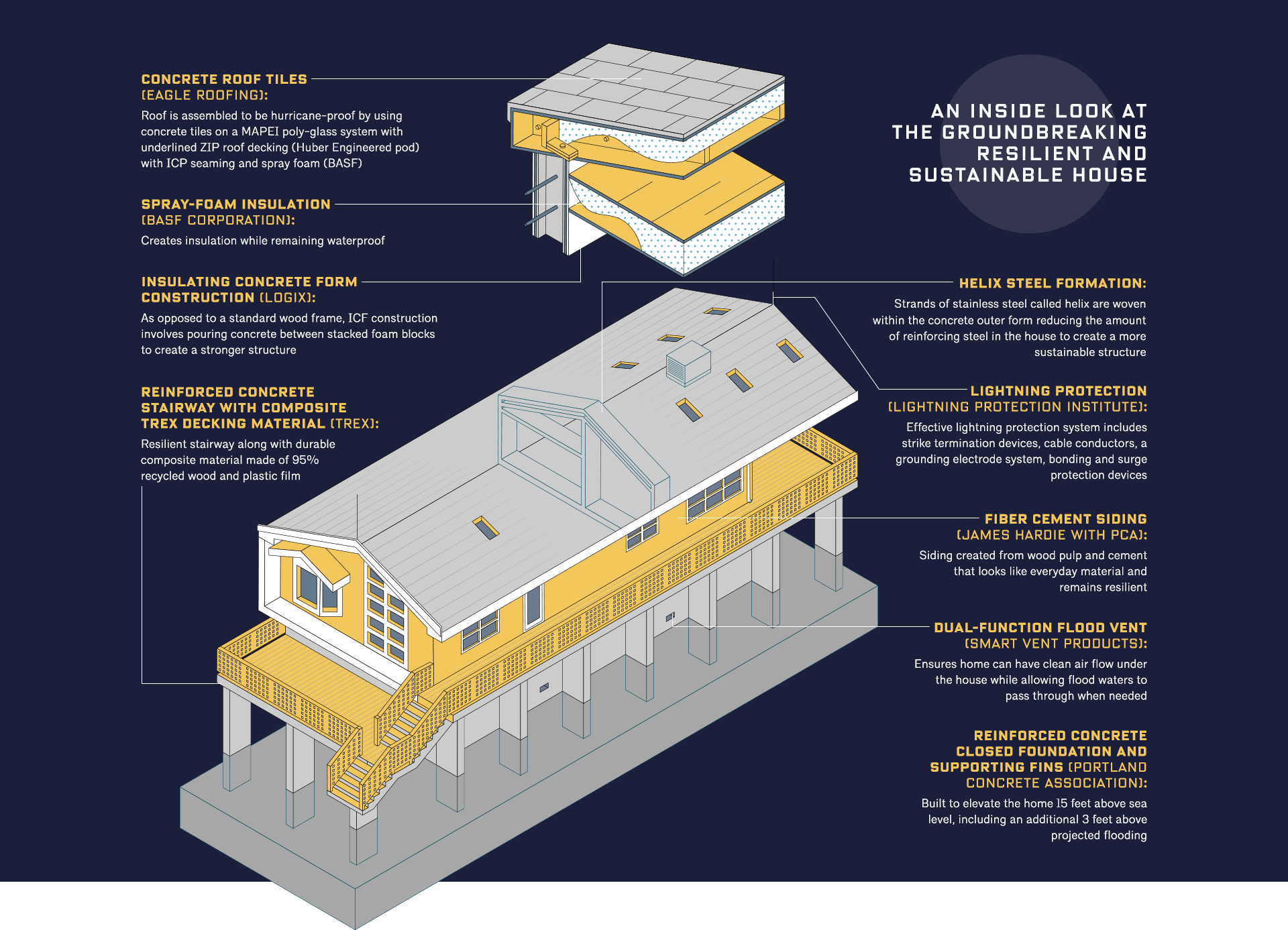 Today, in the face of climate change, architects are increasingly working with communities and experts to design structures that are more resilient and sustainable. From superstorms to fires to floods, over 62 million people worldwide were impacted by extreme weather in 2018, according to a recent report by the United Nations. In the U.S. alone, this rise in extreme weather is having a devastating effect. According to researchers at NOAA, the cost of damage in the U.S. over the last 5 years has been around $500 billion—the past three years experiencing annual average number of billion-dollar disasters more than double the long-term average. Now architects are using their skills to not only design safer structures, but to also bring together experts, homeowners, and civic leaders to create safer communities for the future. In San Juan, Puerto Rico, Jonathan Marvel, AIA, teamed up with Tesla and local government and community leaders to install solar panels in hurricane-damaged neighborhoods, transforming the city infrastructure. In Birmingham, Alabama, Andre Bittas, the Director of Planning, Engineering, and Permit, worked with locals in the historic African-American community of Pratt City to rebuild homes and public buildings, creating a long-term recovery plan in the wake of an EF-4 tornado that destroyed over 1,500 structures. In Brownsville and other coastal communities in Texas, Omar Hakeem, AIA, the design director at Building Community Workshop, collaborated with housing advocacy groups and community leaders to launch Rapido, an initiative that uses design and government funding resources to redesign the recovery process and create resilient houses in existing flood plains. “We’re rebuilding more than just homes,” Hakeem says. “This is design that engages community and empowers them as they move forward.”

"This is design that engages community and empowers them as they move forward."   — Omar Hakeem, AIA, Design director at Building Community Workshop 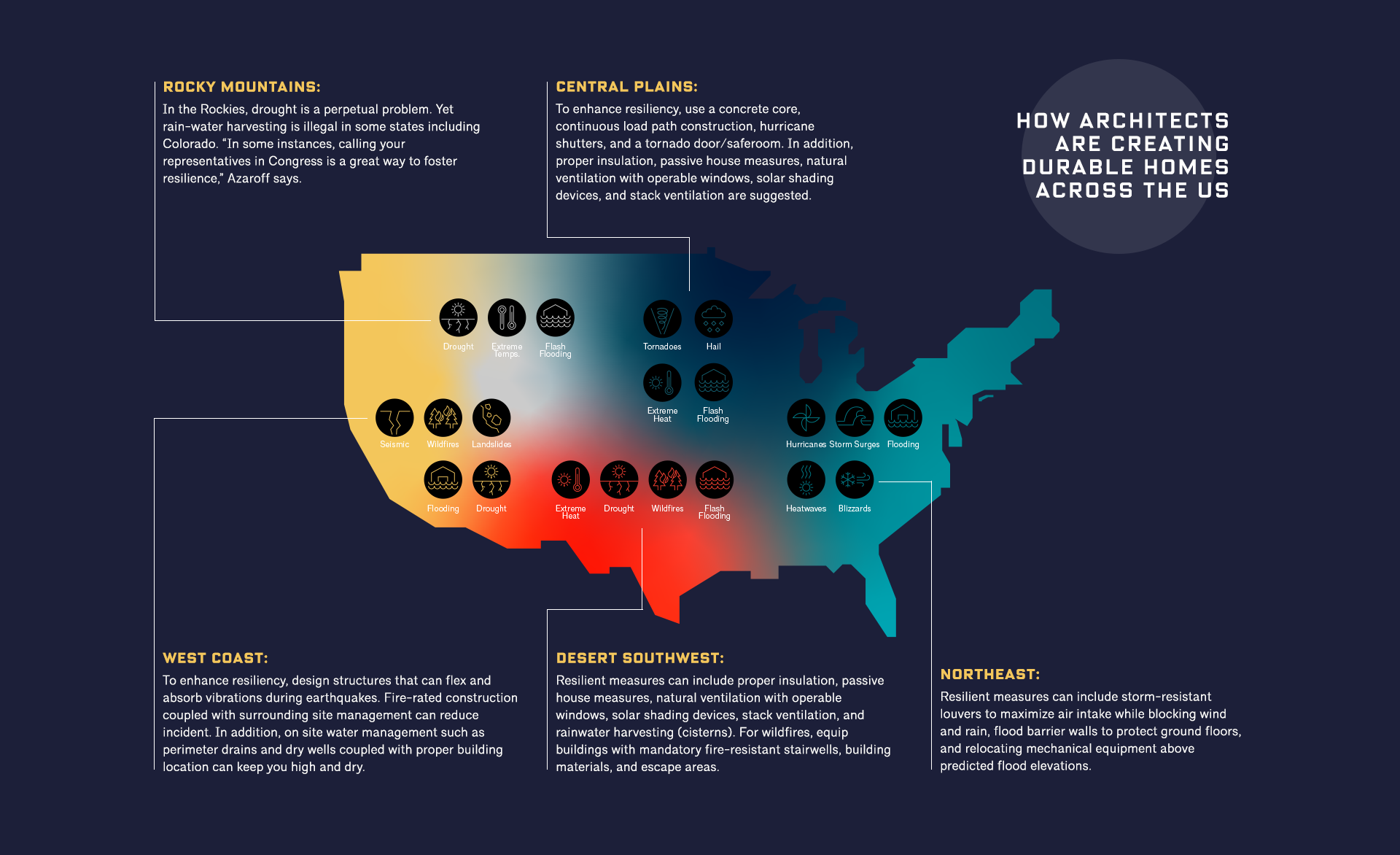 But perhaps no project has taken on resilience and sustainability like the aforementioned Hurricane Strong Home. An architect-led endeavor largely funded by New York City’s Build It Back program—a city-backed initiative that enhances resiliency in waterfront neighborhoods—the house features design elements from experts and industry partners across the U.S. A single-story structure near the beach, the seemingly ordinary-looking home is elevated by 15-foot-tall reinforced concrete fins (think stilts on steroids), has a stainless-steel dual-function flood vent, concrete roof tiles, two points of lightning-rod protection and is designed to act like a large safe room under Insurance Institute for Home & Business Safety and FEMA standards for flood, tornadoes and hurricanes. Overall, the home has what Azaroff dubs “four-dimensional resilience.” It is passive in terms of temperature and power (meaning it can maintain its temperature and rely on renewable energy during blackouts), can resist wind and water, and is designed to stand the test of time—lasting for the next 100 years. Also, it can save homeowners money.

"On average, construction costs for a passive home are only 10% more than a regular house."   — Illya Azaroff, AIA, Founding principal of architecture firm +Lab

According to the National Institute of Building Sciences, every additional dollar spent in upfront construction costs for a resilient home results in potential benefits of $11 for the US, calculated as the present value of savings in future losses prevented by the construction. “On average, construction costs for a passive home are only 10% more than a regular house,” Azaroff says. “In addition, there is a quick return on investment through energy savings, maintenance savings, and lower insurance rates—this house represents a resilient sustainable future that people can relate to.” 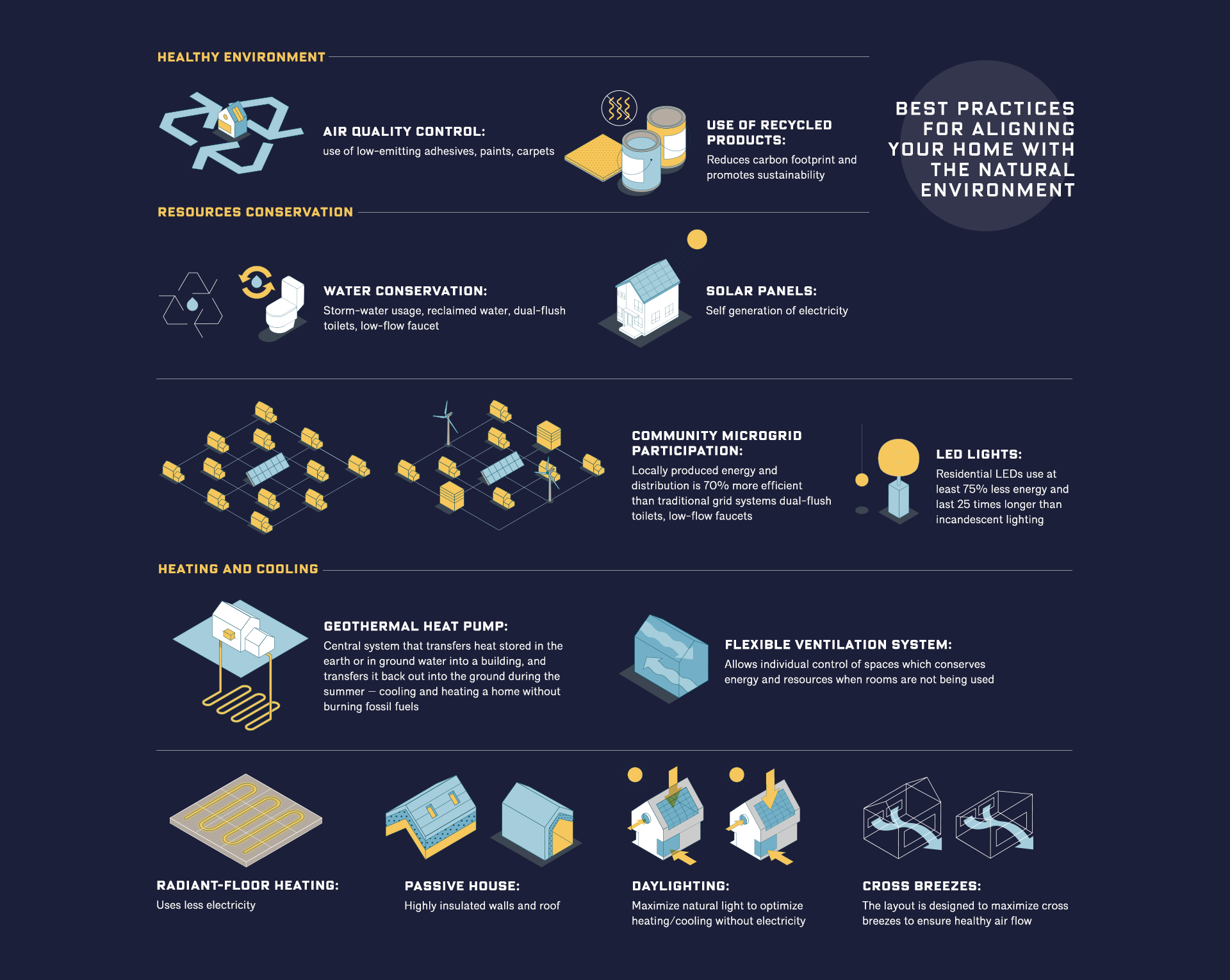 Going forward, Azaroff hopes the Hurricane Strong Home is only the beginning of a national movement towards designing more resilient and sustainable homes. Built with affordable resources that are widely available, the Hurricane Strong Home demonstrates the accessibility of these design practices, while also showing how they often overlap. In order to spread the word, Azaroff has even put all his drawings and resources on the Hurricane Strong Home site, asking others to test and contribute their own new ideas in an effort for everyone to pay it forward. Overall, he hopes it will inspire communities to create their own resilient sustainable homes no matter their environment or budget. “A lot of the principles for this house could be applied to a variety of environments and places,” he says. “We’re at a point where climate change is happening right now and we’re all responding in real-time. So, as architects, we need to give this information away to make a larger impact. This house is a prototype, and I can’t wait to see what someone comes up with next.”

What Can COVID-19 Teach Us About Climate Change? Experts Weigh In